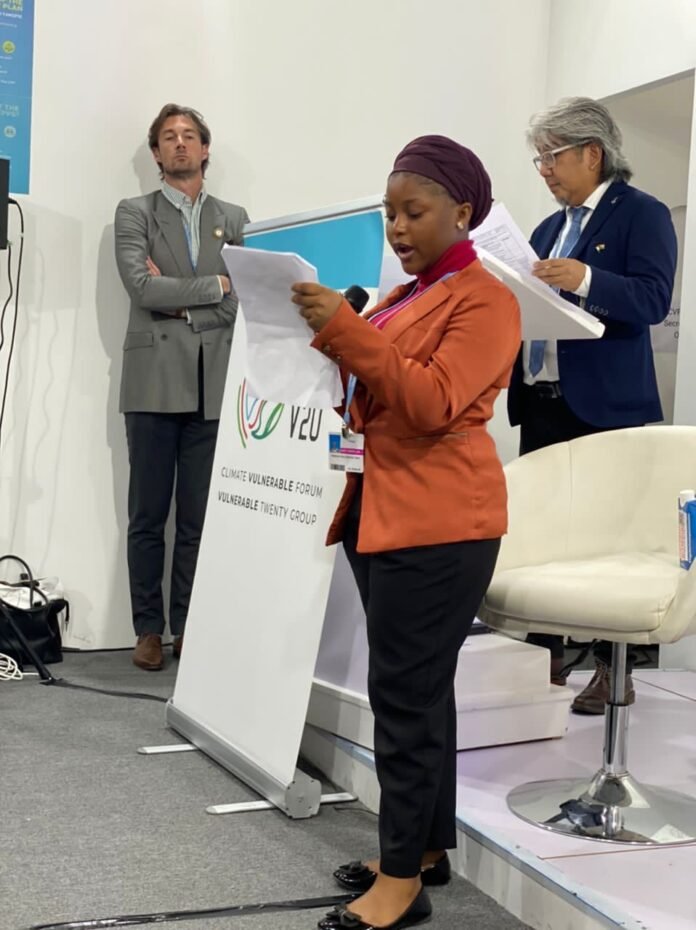 “We shall certainly change the narratives from our vulnerable state to prosperity. But I must say, this could only materialise if we, as nations, put all our commitments and efforts together to fight this canker called climate change,” she said.

Opening a high-level launch of the Global Shield event at COP27 in Sharm el Sheikh, Egypt, yesterday, the Talented Kids season 10 winner noted that it is time for the global communities to implement actionable investment programmes that will target changing the climate change narrative.

“Undoubtedly, it is very apt for our respective climate prosperity plans program responds to this challenge by designing actionable investment and implementation pathways towards climate prosperity as evidenced in the guidelines.

“It presents an opportunity to unlock new avenues for economic cooperation and innovative financing centred on ambitious and climate-smart targets,” she said.

She noted that as youth Ambassador of CVF climate change, she would be rallying the youth and engaging them in a sustained and vigorous climate change sensitization for a behavioural change towards the environment.

“My plans are to form youth clubs in Schools, communities and yearly conferences on climate change and also continue to engage the youths to be planting trees, a project I have named ‘one tree one child project’ for I believe that is the future for the youth.

“Because young people are not only victims of climate change, they are also valuable contributors to climate action. They are agents of change, entrepreneurs and innovators. Just as the UN Secretary General, Antonio Guterres, succinctly stated this generation has largely failed until now to preserve the planet, it, therefore, behoves the current generation of youth who must take up the mantle and be accountable to make sure that we don’t betray the future of humankind,” she added.

READ MORE:  10 things to expect from the 2019 mid-year budget review

The Global Shield event is to raise awareness of the financial protection needs of the Vulnerable Twenty (V20) Group and other vulnerable countries and provide an opportunity for the G7 countries and further donors and partners to pledge support for the implementation of the Global Shield against Climate Risks.

The event was held on the theme “The Global Shield Against Climate Risks: Strengthening Financial Protection in Vulnerable Countries”.

The launch follows the endorsement of the concept for the Global Shield against Climate Risks by the High-Level Consultative Group (HLCG) of the G20+ and V20-led InsuResilience Global Partnership (IGP).

V20 Group of Finance Ministers from climate vulnerable economies and the G7 Presidency reached agreement on the Global Shield.

The agreement is a financial protection cooperation that responds to loss and damage as a contribution to implementing the Paris Agreement on climate change.

Why crying after sex is normal