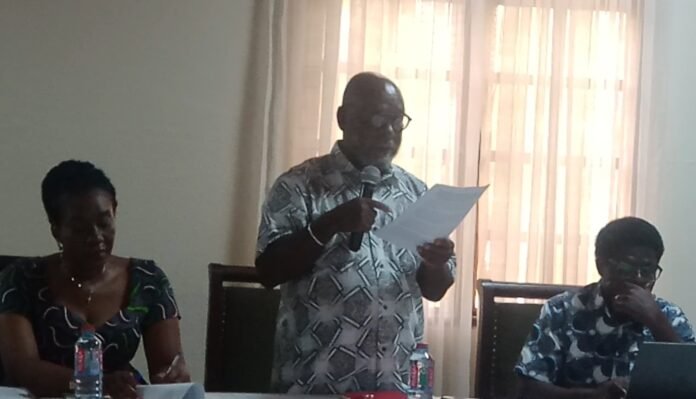 The National Population Council together with other stakeholders took the media through a day’s briefing on the redrafting of new policy of Reproductive Health Education in Accra. The engagement that took place at the Coconut Reagent Hotel saw the assemblage of various stakeholders and bodies to deliberate on a new policy direction in connection with the Reproductive Health Education (RHE) in our schools . In attendance were various Media houses ,religious bodies, agencies and Civil Society Organisations.
The chairman for the day was Professor Kwame Karikari the originator of Media Foundation For West Africa and now a Senior Lecturer of Wisconsin University in Communication Studies.

In her welcome address,the The Executive Director of National Population,Dr Leticia Adelaide Appia highlighted on the need for proper policy direction and promulgation to properly situate the adolescent lives in the country. Stating the facts Madam Leticia pointed out that records available at the Ghana Statistical Service denotes that Ghana’s youth population is above 74 % and are sexually active and adventurous. As a result , about 24 % of the youth suffer lack of knowledge of HIV infection and other STDs and this has a dire consequences on the nation’s population development and progress. She opined that since the bulk of the youth population constitute the bulwark of the nation’s forward march ,good policies need to be crafted to address the excesses. Again she alluded that,the most affected youth of the above are in the age bracket of 15-30 years,very vunerable and susceptible to Aids and STDs infections .

Dr Appiah indicated that about 100,000 teenage girls get pregnant and give birth to increase the nation’s population and calls for national concern . Unplanned for and teenage pregnancies bring in their wake child mortality and mother mobidity and serious health implications.It also affects social,health and economic planning and diseqilibrium in standard of living giving way to social vices, poverty, and retrogression .

She emphasised that there should be a marked departure from irresponsible sexual behaviour and sexual experimentation and apt response from the youth who may be ignorant and unaware of the consequences of their amorous and lucid behaviour.She courted the media being the fourth estate of the realm to lead the crusade to drum home the need to draw the attention of policy makers, political leaders and duty bearers to lower their ears to this Clarion call for national progress. She charged the Media to partner the NPC and other other agencies to tackle this adolescent explosion dangling on the nation as a result of its precarious consequences for the nation. Madam gave 14 point write up to illustrate the dangers, challenges, solutions, blueprint, directions to tackle the issues of Reproductive Health Education in the country head on.

A lecturer from Cape Coast University Dr Joshua Amo- Adjei who has been tasked to redraft the Reproductive Health Education curriculum for the country showed the gathering the intended curriculum for the various schools in the country per power points.He stated that the new curriculum seeks to collate views from the stake holders as well as from the media to fine tune and finalise the document for the schools usage.

He advocated for close collaboration of both sexes in studying the Reproductive issues since it affect all of them. The chairman for the day Prof. Kwame Karikari advised the Media to turn their attention to addressing issues of this nature that had the potential to dislocate the nation’s forward march.

READ MORE:  "I Will Attend Willi Roi's Funeral if..." Stonebwoy

He asked all religious leaders to bring their minds to bear on this national issue and do away with the suspicions myth and sipershitions. The Media must also digest the report accurately and culturally and avoid the unhealthy political sensationalism.

WE ARE READY TO ADMIT MORE STUDENTS NEXT ACADEMIC YEAR-PENSEC

Pdf: Full Text of the 2019 State of the Nation’s Address